(translated and adapted from: http://www.sciencefrance.com/, with kind permission)

Mössbauer Spectroscopy is a non-destructive characterisation method for solid materials, allowing the precise determination of oxidation state, bonding properties (covalency, symmetry), and magnetic properties (Ferro- & Antiferromagnetism) of an atomic species in a solid. Although iron (Fe) and tin (Sn) are by far the most studied elements, the technique can be used on around 40 different chemical elements.

Mössbauer Spectroscopy is recoilless nuclear resonance absorption spectroscopy. It permits the ultra-precise measurement of the difference between energy levels of the atomic nucleus in solids. These energy levels are slightly shifted by the number and state of the surrounding electrons (their wave function and spin state), and thus provide precise information on the atom’s valence state, chemical bonds and magnetic properties.

Energy levels are determined by measuring absorption of gamma-ray photons. In the most commonly used ‘transmission setup’, the sample is placed between an emitter (source) providing photons with ‘fitting’ energy, and a detector of these photons. Absorption of the photons by the sample atoms is registered as a reduced signal in the detector. The energy of the emitted photons is varied by moving the emitter and thus invoking the Doppler effect. Plotting detector signal strength against emitter photon energy thus shows a resonance peak, see Fig 1. If the absorbing atom’s energy levels have also been shifted due to chemical bonds etc, this can be detected by a shift of the resonance peak, or splitting into multiple peaks.

The precision of the measurement comes from the fact that the energy levels of the atomic nucleus are very ‘sharp’ (following Heisenberg’s Uncertainty Principle). The energy of the absorbed photon must be precisely equal to the difference between two energy levels. Even a slight shift from the ‘correct’ energy results in loss of resonance. Hence the resonance absorption can only be observed in solids, where the atoms are ‘fixed’ in a lattice, and the momentum is transferred to the lattice. The recoilless nuclear resonance absorption of gamma rays in solids is called Mössbauer Effect. 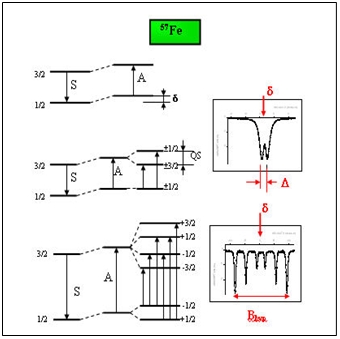 Figure 1 shows a typical spectrum and measurement in Iron, displaying the “hyperfine parameters”:
(a) isomeric shift (delta) which is due to different electron density at the nucleus, indicating for example the oxidation state and spin
(b) quadrupole splitting (DELTA), depending on the population of the various valence states, the type of environment (lattice) as well as its local deformation
(c) hyperfine field (H) due to an internal or external magnetic field, for example presence of magnetic ordering of the electrons
(S = Source, A= Absorber)

The technique can be used only if for the chemical element in question a fitting emitter isotope exists. In addition, certain conditions for the exited energy states must be fulfilled. For example the isotope 57Fe can be examined using 57Co as emitter. A detailed overview over suitable elements can be found on the website [4]. Samples can have the shape of powders (typically a few hundred mg), thin films or ribbons. 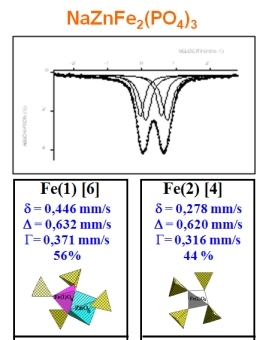 
Both papers are strongly oxidised by the tannin and iron present in the ink; but the very different spectra and site concentrations clearly show that the dominant chemical reactions causing the decay of the paper were different.
Source: C. Burgaud, V. Rouchon, P. Refait and A. Wattiaux; presented at GFSM06 – Le Mans 19-20 Mai 2006

[4] http://orgs.unca.edu/medc/Resources.htm Mössbauer Effect Data Center, with details on available elements and many other data