A sample, introduced in an ultra high vacuum chamber, is irradiated with an X-ray beam. The kinetic energy (in electron volts, eV) of emitted electrons of all elements (except H and He) present at the surface (analyzed depth between 1 and 10 nm) is measured with a precision of about 0.2 eV. Shape and position of peaks depend on the chemical state of the element (the so-called “chemical shift” effect). Area of peaks used in combination with sensitivity factors allow to calculate elemental concentrations with a detection limit of a few tenths of mole percent. A detailed analysis of certain well-resolved peaks allows quantifying functionalities.

1) determination of concentration and oxidation state

XPS provides useful information on surface elemental concentrations and chemical state. For example, the decomposition of the Mo 3d peak of a molybdenum based oxide catalyst reveals that Mo atoms are present at the surface in three oxidation states: Mo6+, Mo5+ and Mo4+ (see Fig below and Ref [1]). 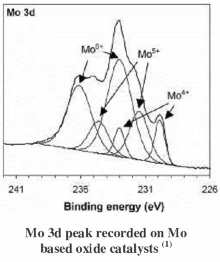 XPS images show the distribution of a given element or even a given chemical state of the element at the sample surface. In parallel imaging, data are collected simultaneously from different spots of a given sample area with a space resolution of about 5 µm. This is illustrated in the image below which consists of an overlay of O 1s and C 1s XPS scans, recorded on a patterned surface of polystyrene (PS) produced by photolithography which shows stripes of polystyrene oxidized (PSox) by plasma (for details see Ref [2]). 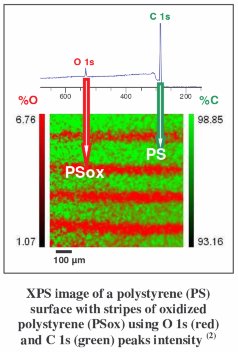 XPS analysis can also be performed at very low temperature (~118 K) to reduce surface degradation on sensitive specimens like catalysts, biomaterials or polymers. Wet samples can also be freeze dried directly into the spectrometer chamber. For example a frozen specimen constituted of a drop of water deposited on a sunflower oil surface was introduced in the spectrometer, the sublimation of water was provoked and the oil-water interface was then characterized at low temperature (Ref [3]).

Pseudo in-situ high temperature reactions can be performed in a catalyst cell attached to the spectrometer chamber, samples are treated with specific gases and heated up to 800°C, before to be transferred and analyzed in the analysis chamber. For example, samples can be reduced under hydrogen flow and then analyzed without being re-oxidized by air exposure. The approach is interesting when an accurate evaluation of the oxidation state of elements is requested without perturbation from a re-exposure of the samples in air.

The depth of analysis is depending on the electron inelastic mean free path. The higher the analyses angle A between the electrons detection direction and the normal to the surface, the higher the sensitivity with respect to the surface. For example, the surface composition of a stainless steel stored for increasing times in fresh water and analysed at A = 0° and 60°, shows an enrichment in iron oxide with respect to chromium oxide at the extreme surface. (Ref [4])

[1] F. Dury and E.M. Gaigneaux, “The de-oxygenation of benzoic acid as a probe reaction to determine the impact of superficial oxygen vacancies (isolated or twin) on the oxidation performances of Mo-based oxide catalysts”, Catalysis Today 117 (2006) 49.

Sequentially applied XPS and ion etching generate dataset of spectra which provides quantified knowledge of elemental distribution in depth; the depth range can vary from few nanometers up to several micrometers. DP can be applied for analysis of various nano-scaled systems like multi- and buried layers, or diffusion profiles. The plot below shows depth profile of SiO2/TiO2 multilayer deposited on Borofloat® glass substrate. Every single layer is 100 nm thick. Apparent difference between SiO2 and TiO2 layer thickness arises from material-specific sputter rate. 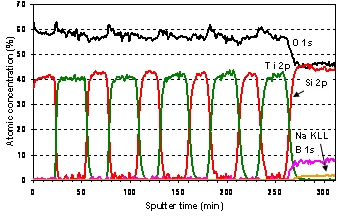