Scanning Electron Microscopy (SEM) is one of the most common methods of materials characterisation. It permits to obtain images of high resolution (down to few nm) and very high focus depth, allowing imaging of very rough surfaces. The downside is that the SEM operates in high vacuum, except for Environmental SEM (ESEM) which operates at low vacuum, see below. Furthermore, the sample surface must normally be conductive, which can be achieved with sample coatings if necessary. Most SEMs are equipped with an EDS (Energy Dispersive x-ray Spectroscopy, also known as EDX) which allows quantitative analysis of chemical elements present in the sample.

The electron beam, which typically has an energy ranging from a 2 to 40 keV, is focused by one or two condenser lenses into a beam with a very fine focal spot size. The beam passes through pairs of scanning coils or pairs of deflector plates in the electron optical column, typically in the objective lens, which deflects the beam horizontally and vertically so that it scans in a raster, fashion over a rectangular area of the sample surface.

The energy exchange between the electron beam and the sample results in the emission of electrons and electromagnetic radiation, which can be detected to produce an image, as illustrated below.

Secondary electrons are emitted when the primary beam that has lost a part of its own energy, excites atoms of the sample. The secondary electrons have a little energy (about 50 eV) divided up on a large spectrum. Due to their low energy, these electrons originate within a few nanometers from the surface.

Their low energy has two advantages:

1) It is easy to deflect them (with a potential difference) and to collect a large amount of the electrons on the detector in order to have a picture with a good ratio signal/noise.

2) They can not cover a long distance, because they are soon stopped. They therefore come from an area closed to the beam and this position gives pictures with very good resolution. Using this technique, resolutions less than 1 nm are possible. 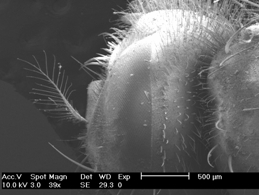 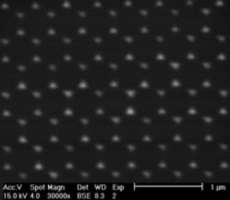 The SEM normally operates at high vacuum (10^-5 to 10^-8 mbar) in order to avoid collisions between the electron beam and gas atoms, which add noise to the image.

If one wants to examine samples containing water, some SEMs can be operated with a low vacuum. By utilizing cooling Peltier stage and high water vapor pressure in the specimen chamber it is possible to achieve high levels of humidity (up to 100%). In these conditions wet or hydrated specimens (cells, plant samples, tissue, etc.) will not dry and introduce any artifacts. Dynamic experiments are also possible; for example, drying or crystallization processes can be examined.

The incident electron beam may excite electrons in an inner shell of the sample atoms, resulting in the formation of an electron hole within the atom’s electronic structure. An electron from an outer, higher-energy shell then fills the hole, and the difference in energy between the higher-energy shell and the lower energy shell is released in the form of an X-ray photon, which has an energy characteristic for each chemical element. The x-ray released by the electron is then detected and analyzed by the energy dispersive spectrometer.

The resulting spectrum (see example below) thus indicates which chemical elements are present in the sample, either locally or overall. Combining an SEM scan with EDS can be used to generate a ‘map’ of element distributions, see below.

In addition, a quantitative distribution of elements can also be calculated using the relative height of the peaks, if the detector has been calibrated for those elements.

Electron backscatter diffraction (EBSD), also known as backscatter Kikuchi diffraction (BKD) is a technique used to determine the crystallographic texture or preferred orientation of polycrystalline materials. For this purpose, the SEM has to be fitted with an EBSD detector, which measures the distribution of the electrons diffracted from the point of the sample which is under the beam. This distribution shows a characteristic diffraction pattern, known as Kikuchi pattern. Using automated software, the measured pattern is compared against a database, and the orientation of the point of sample under the electron beam is determined. Repeating this operation point for point over a given area results in an orientation map, as shown in the example below.

EBSD can be used not only to crystal orientation mapping, but also for defect studies, phase identification, grain boundary and morphology studies, local heterogeneity investigations, material discrimination and identification.