Solid-State Nuclear Magnetic Resonance Spectroscopy (SNMR) is an analytical technique used to study the structure and dynamics of crystalline, amorphous or disordered organic, inorganic or hybrid solids. The source of the NMR signal is the atomic nucleus with an intrinsic angular momentum (or spin) and, thus, with a magnetic moment. When the sample is placed in an external magnetic field B0 (Fig. 1) an energy difference ?E is created between nuclear magnetic states. Excitation of the nuclear spin system is achieved with resonant radiofrequency pulses of frequency f=gBo/2pi, where g is the magnetogyric ratio of the nucleus. This relatively low frequency (hundreds of MHz) indicates that the energy separation of the spin states is quite small. Since the nuclei in each of the states are in equilibrium, the numbers in the different spin states will be similar (actually, because there is a Boltzman distribution among the spin states, a few more nuclei reside in the lowest energy states). Because incoming radiation is equally likely to cause stimulated emission (transition from the upper to the lower state) as absorption, the NMR effect depends on an excess of nuclei in the lower states. This makes NMR an intrinsically insensitive technique (more so than, e.g., vibrational and electronic spectroscopies).

The information provided by NMR depends not just on the kind of nuclei but also on the characteristics of the electronic environment in which the nuclei are immersed and on the positions of nuclei within molecules. Thus, in NMR magnetic nuclei probe the molecular structure; they also probe internal molecular motion (if this is not faster than the time scale of NMR) and mobility of molecules.

The NMR spectral lines of liquid specimens are very much narrower than those from solids (Fig. 2). This difference arises from the static anisotropic interactions to which the nuclei are subjected in the solid state. In fluids, the rapid isotropic motions of the nuclei average the anisotropic interactions. The main anisotropic nuclear interactions which are of interest in the solid state (and may be the source of line broadening) are the following: Zeeman interaction with the external magnetic field; the direct magnetic dipolar; the indirect electron-coupled (J-coupling); electric quadrupolar (only for nuclei with spin larger than 1/2); electron shielding (chemical shift for non-metals and Knight shift for metals). Special techniques have been developed to average out the broadening interactions. In magic-angle spinning (MAS), a powdered sample is placed inside a cylindrical rotor whose axis is inclined at 54.7º relatively to the external magnetic field B0, and mechanically spun at a frequency up to 70 kHz. CRAMPS (Combined Rotation and Multiple Pulse Spectroscopy) is a technique particularly useful for recording the NMR spectra of 1H, where MAS is combined with a train of carefully designed radiofrequency pulses. Dedicated techniques, such as multiple-quantum (MQ) MAS NMR and Satellite Transitions (ST) MAS NMR have been developed for half integer quadrupolar (spin larger than 1/2) nuclei, which pose particular problems. The spectra of low natural abundance nuclei, such as 13C, 15N or 29Si, are in general recorded with a technique known as cross polarization, which improves sensitivity (and combined with MAS). 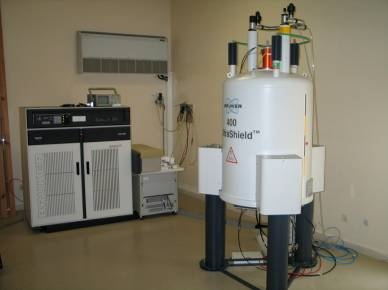 Fig. 1 – Solid-state NMR spectrometer. The superconducting magnet is shown on the right

SNMR is now used to study almost all types of materials, ceramics, glasses and minerals, catalysts, pharmaceuticals, polymers and various other inorganic, organic and hybrid compounds. It is particularly useful when the specimens are not crystalline, poorly crystalline or microcrystalline, because these are difficult systems for X-ray diffraction. Moreover soft samples which are intermediate between a liquid and a ‘real’ solid (for example gas molecules adsorbed on a catalyst surface) are also better studied by SNMR techniques. Paramagnetic samples and metals are in general not trivial to study. Moreover, NMR is a non-destructive technique and the sample is available at the end of the study (although a powder is normally required because the sample must be spun). For example, the nature of the Al species in zeolite catalysts or the quantification of amorphous/crystalline domains in polymers have been studied by SNMR.

Fig. 2 – 1H NMR spectra of mentol recorded in a CDCl3 solution and in the solid state using liquid-state NMR techniques (that is, not using techniques which improve the resolution of solid-state spectra). Note that the horinzontal scale is the same for both spectra. 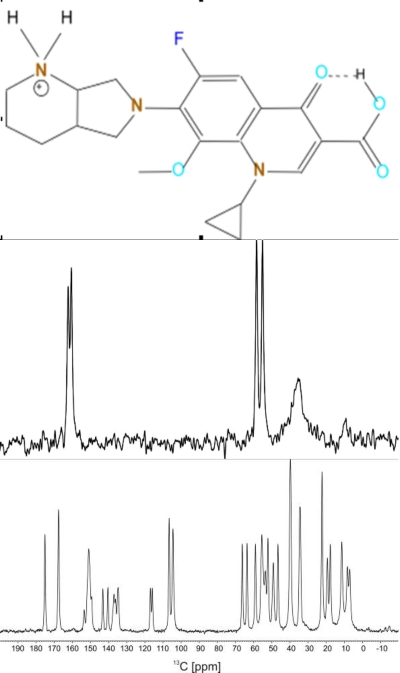 Fig. 3 – 1H-15N cross-polarization (CP) MAS (top) and 1H-13C CPMAS NMR spectra of solid antibiotics Moxifloxacin, recorded at 9.4 T (400 MHz). Because there are two non-equivalent molecules per unit cell more signals are observed than might be expected. For example, there are three types of N atoms in the molecule but six resonances are actually observed (although two overlap in the peak at ca. -335 ppm). 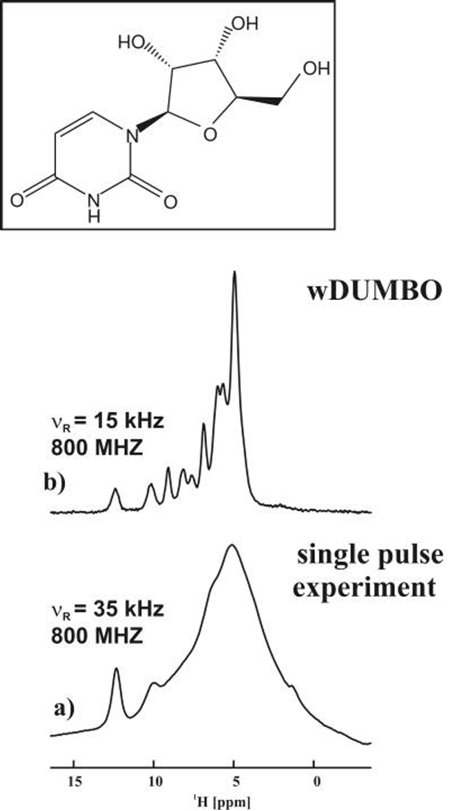 Fig. 4 – (a) ‘Normal’ 1H magic-angle spinning (single-pulse), and (b) CRAMPS (wDUMBO pulse sequence) spectra of uridine. Note the considerable resolution enhancement obtained with CRAMPS, even at a much lower spinning rate.

Fig. 6 – 27Al triple-quantum MAS NMR spectrum of microporous aluminophosphate IST-1, recorded at 9.4 T and a spinning rate of 15 kHz. The F2 projection is essentially the ‘normal’ magic-angle spinning spectrum, while the F1 projection is a high-resolution (isotropic) spectrum. The spectra on the right are cross-sections taken through the 3 resonances and parallel to the F2 axis, showing for 5-coordinated Al a typical powder pattern due to the second-order quadrupole interaction 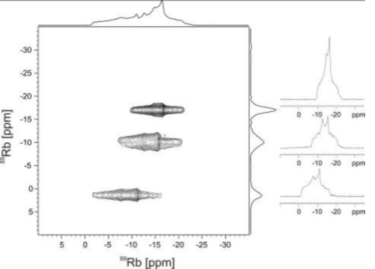 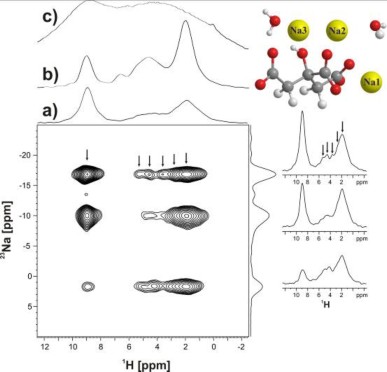 Fig. 8 – 23Na-1H cross-polarization hetereonuclear correlation MAS NMR spectrum, recorded with STMAS (for high resolution in the 23Na dimension) and CRAMPS (pulse sequence wPMLG, for high resolution in the 1H dimension) of diihidrate sodium citrate. 9.4 T (400 MHz) and spinning rate of 15 kHz. (a) F2 projection, (b)1H wPMLG3 spectrum, (c) ‘normal’ 1H MAS NMR spectrum. The spectra on the right are cross-sections taken through the resonances and parallel to the F2 axis. 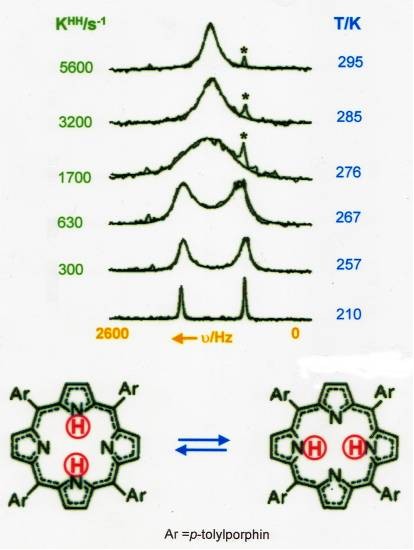 Fig. 9 - Tautomerism studied by 15N NMR (asterisk depicts an impurity). The changes observed in the spectra as a function of temperatute provide clues about the molecular dynamics of the system

Other Examples of Applications

Below, we present a list of publications (ordered by date) illustrating the application of NMR to the study of solids. The paper titles provide an indication of the types of systems studied.